Our old Samsung washing machine was spoilt four days before Chinese New Year. To be more specific, the "power on/off" button was spoilt, so there was no way to switch on the washer.

Since the washer was already about 9 years old, it would be better to get a new one.

In a hurry to get a new one before Chinese New Year, we went down to one of Courts' retail stores after checking the prices of their washers at their web store. At that time, they were having a promotion on Panasonic NA-F75S3HRQ. It was a top loading washing machine with a 7.5 kg capacity. It has three ticks on water efficiency and a 12 years motor warranty. Everything looked good so we decided to buy this. However, it could only be delivered on the third day of Chinese New Year (21 Feb 2015), which was a Saturday.

After waiting for days, our new washing machine finally came. After trying a few times, we concluded that it could not spin dry properly. As it was within 7 days, we could request for a one-to-one exchange with Courts so we called them the next day (Sunday). We had to wait till Wednesday (25 Feb 2015) for Courts to get someone to check on the machine before we could decide on an exchange.

On Wednesday morning, two persons from Courts came over to take a look. After checking, they told me we could do a one-to-one exchange, but they needed to inform their supervisor first.

In the afternoon, a lady from Courts called Ardon and checked with him whether the external drain water hose from the washing machine was placed on the floor and he told her "yes". He also told her that we wanted to upgrade to another washer model so that we would not get the same problem.

Later in the day, we went down to the same store where we bought the washer and the lady who called Ardon attended to us. She explained to us that all the top loading washers these days were made with the drainage hole (located behind the washer) much lower than those made many years ago. So, the external drain water hose should not be placed higher than the drainage hole or else water could not flow out properly. So, no matter which model we chose, we would face the same problem. The ways to solve this was either to cut/saw the PVC pipe to a shorter height or to elevate the washer. Front loading washers, on the other hand, would require the external drain water hose to be placed high for water to flow out.

I had read a review saying that the height of the pipe cannot be too high for top loading washers but, at that time, we did not know that our new washer's drainage hole was lower that of our old Samsung washer. We did not think that the height of our drainage pipe was causing the problem.

The lady said we could go home and test it out again before deciding whether to change. We just needed to give her a call. So, we went home to test with the external drain water hose placed in a small bathtub (low enough so that water can flow out). After all the hassle of getting the water out from the bathtub and getting the kitchen floor quite wet, we were satisfied that the washer worked fine with proper drainage.

Now the next problem was to decide whether to saw the PVC pipe to make it lower so that water could flow out properly or to elevate the height of the washer. Ardon managed to remove the top part of the pipe (it was detachable). However, the water hose could not be properly put in the remaining pipe there and we were concerned that this may cause leakage of water. Furthermore, even without the pipe, the water hose would still be placed quite high due to its length. In the end, we decided it was easier/better to elevate the washer. 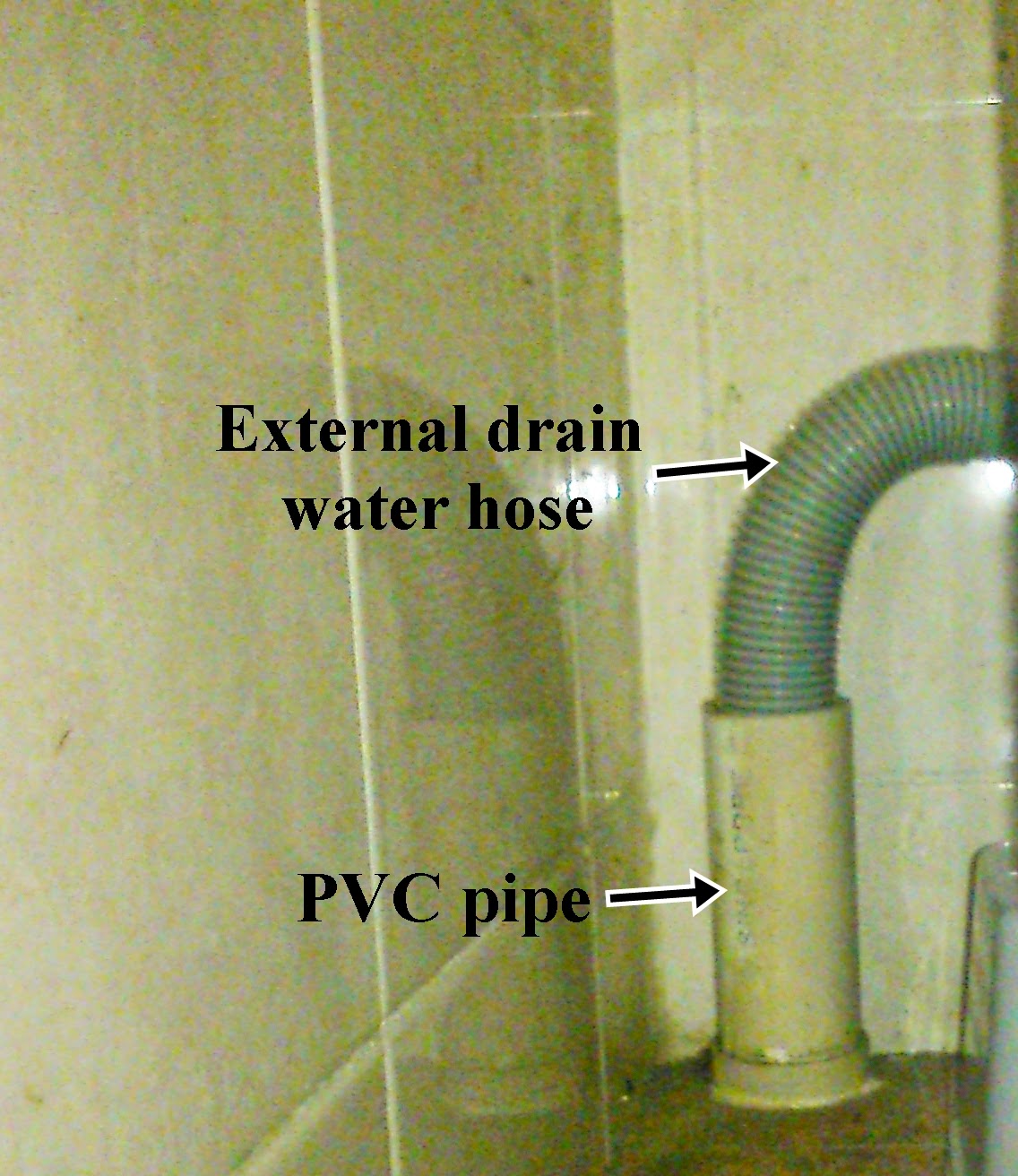 Ardon managed to get 4 stands (sold as a set) from a shop and we placed them below the washer. Our only concern was that the washer might not be stable on the stands. 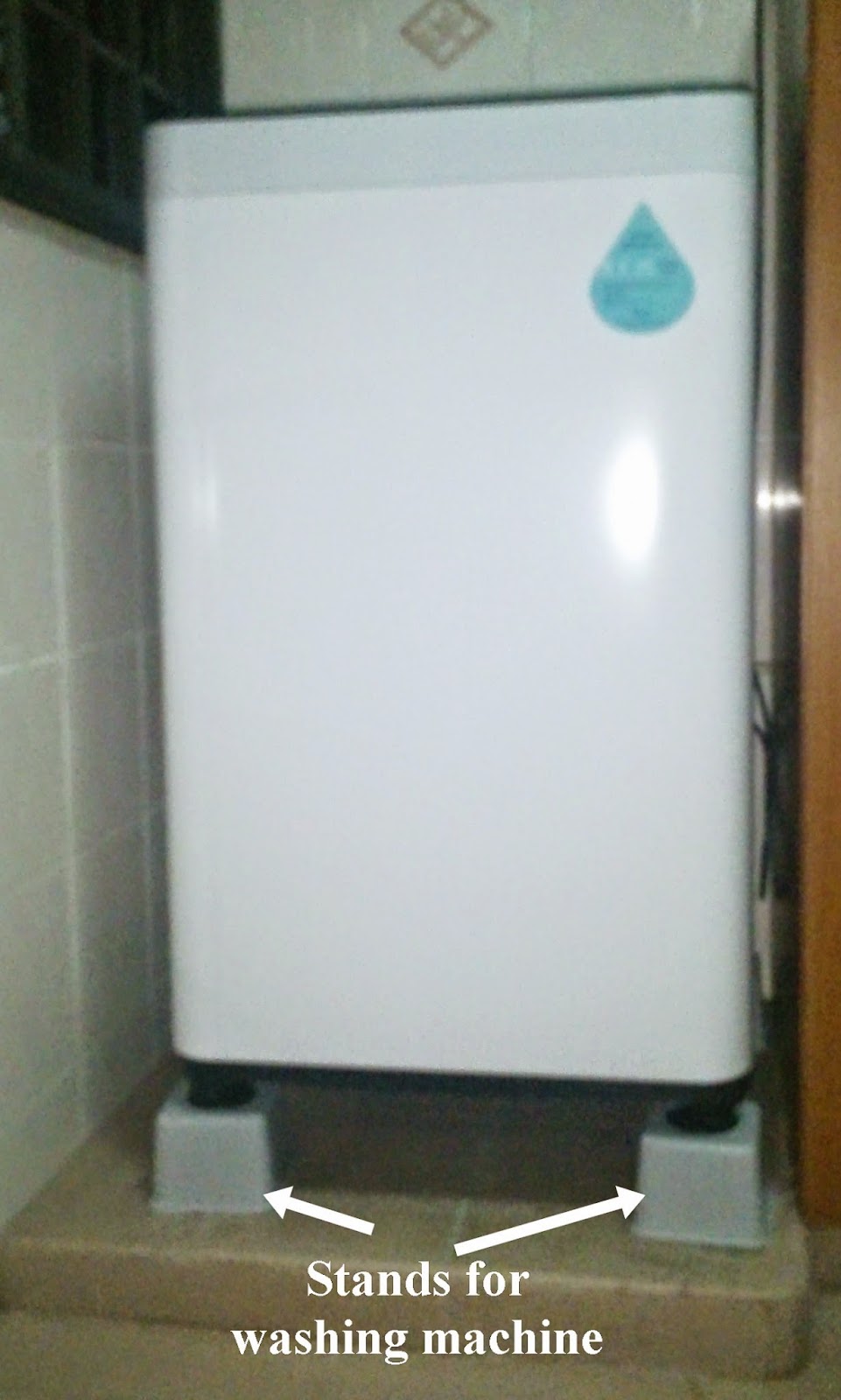 We tested the washer again. Everything worked well. The water was drained away properly and the clothes were quite dry after the spin cycle. Thank goodness, it worked!