I had always thought we needed about 2 to 3 hours to cook bird's nest soup. This seemed to be confirmed from what I had seen from some blogs and websites. Some bird's nest even required cleaning/plucking of feathers, which was time consuming and tedious.

Recently, I saw from Hock Hua Tonic E-Store that they were having a promotion on some of their bird's nest. Some of the instructions there stated that the bird's nest only needed to be soaked for 1 hour and then cooked for 45 minutes to 1 hours.

Bird's nest was usually sold by weight. Since it was my first time trying to cook bird's nest, I chose the cheapest bird's nest available at that time as there was not much difference in terms of efficacy. I bought the 特选沙巴洞燕片 Super FS SABAH BCN-White (AA) at a Hock Hua Tonic retail store, which was sold at a special price of $50.00 for every 37.5 g (一两).  I bought about 42 grams, which cost $56. I also further confirmed with the staff on how to prepare the bird's nest. The staff advised me to soak the bird's nest for 1 hour, remove the water that was used to soak the bird's nest and double boil for 45 minutes.

Their staff usually tell us to cook 1 to 2 piece of bird's nest for 1 person's consumption. This seemed to be a lot in my opinion and would be very thick in consistency. Maybe some people loved to eat bird's nest this way.

I had previously researched on the optimal quantity of bird's nest to consume every day and found that it should be between 1 to 5 g. Below 1 g, it is ineffective. If we consume more than 5 g, the human body cannot absorb that much and, hence, it would be wasted. I bought six pieces, which weighed 42 g, so one piece was about 7 g. There are four of us in our family, so 7 g divided by 4 persons would be about 1.75 g per person. I think this was good enough for us.

Now that we have the Tefal Electric Steamer, it was very convenient for me to double boil bird's nest. After soaking the bird's nest for 1 hour, I removed the soaking water and put about 1 small bowl of water  to the bird's nest and steamed for 45 minutes.

After 45 minutes, I added rock sugar to the bird's nest soup and it was ready for consumption. We were satisfied with the consistency.

Last week, we saw that there was a stall at Causeway Point mall selling freshly double boiled bird's nest. Coincidentally, they also used the Tefal Electric steamer to double boil their bird's nest. :) 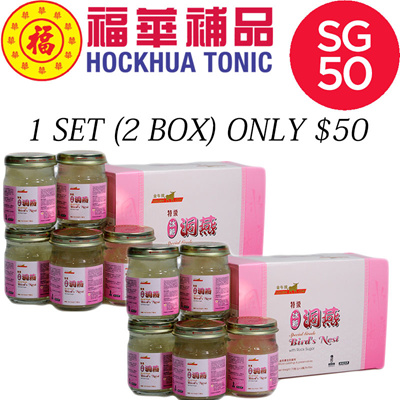