Gardens by the Bay

Singapore celebrated its 50th birthday on 9th Aug 2015. We had a long weekend from 7 Aug to 10 Aug 2015. Many places of interest had SG50 promotions and events held during the Jubilee Weekend. Some events were even free to attend.

We planned to visit one of those places on 7 Aug 2015. However, on 7 Aug 2015, it was raining till about mid afternoon. It would not be a good idea to visit places that were too far from our house, that were outdoors and required paid admission since half the day was gone.

By the time we got ready to go out, it was already 5 pm. We decided to go to Gardens by the Bay since we had never been there ever since it opened.

By the time we reached there, Sera was hungry so we had our dinner at MacDonald's. 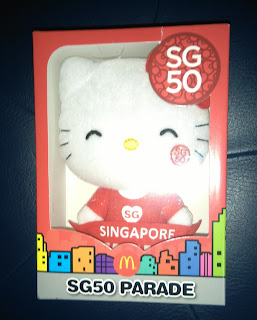 Sera was happy to be able to purchase this SG50 edition of Hello Kitty from MacDonald's.

After dinner, we went to the ticketing counters and found that the queue was very long with a waiting time of about 40 minutes. We reckoned that after buying the tickets, there would not be much time left to walk around the conservatories as both of them closed at 9 pm. Thus we just walked around the area and went for the Garden Rhapsody (SG50 Special) held at the Supertree Grove at around 7.45 pm.

After the show, we caught glimpses of a fireworks display and we walked up a bridge towards the direction where the fireworks was seen but the fireworks stopped. It lasted less than 5 minutes :(. Since we were already up on the bridge, we stayed there for the next Garden Rhapsody. Below is a combined video of the Garden Rhapsody (SG50 Special) which was taken at the 7.45 and 8.30 pm show and taken from different angles. Enjoy!

Email ThisBlogThis!Share to TwitterShare to FacebookShare to Pinterest
Labels: Places of Interest, SG50