Our Scoot Experience - On the Way to Gold Coast 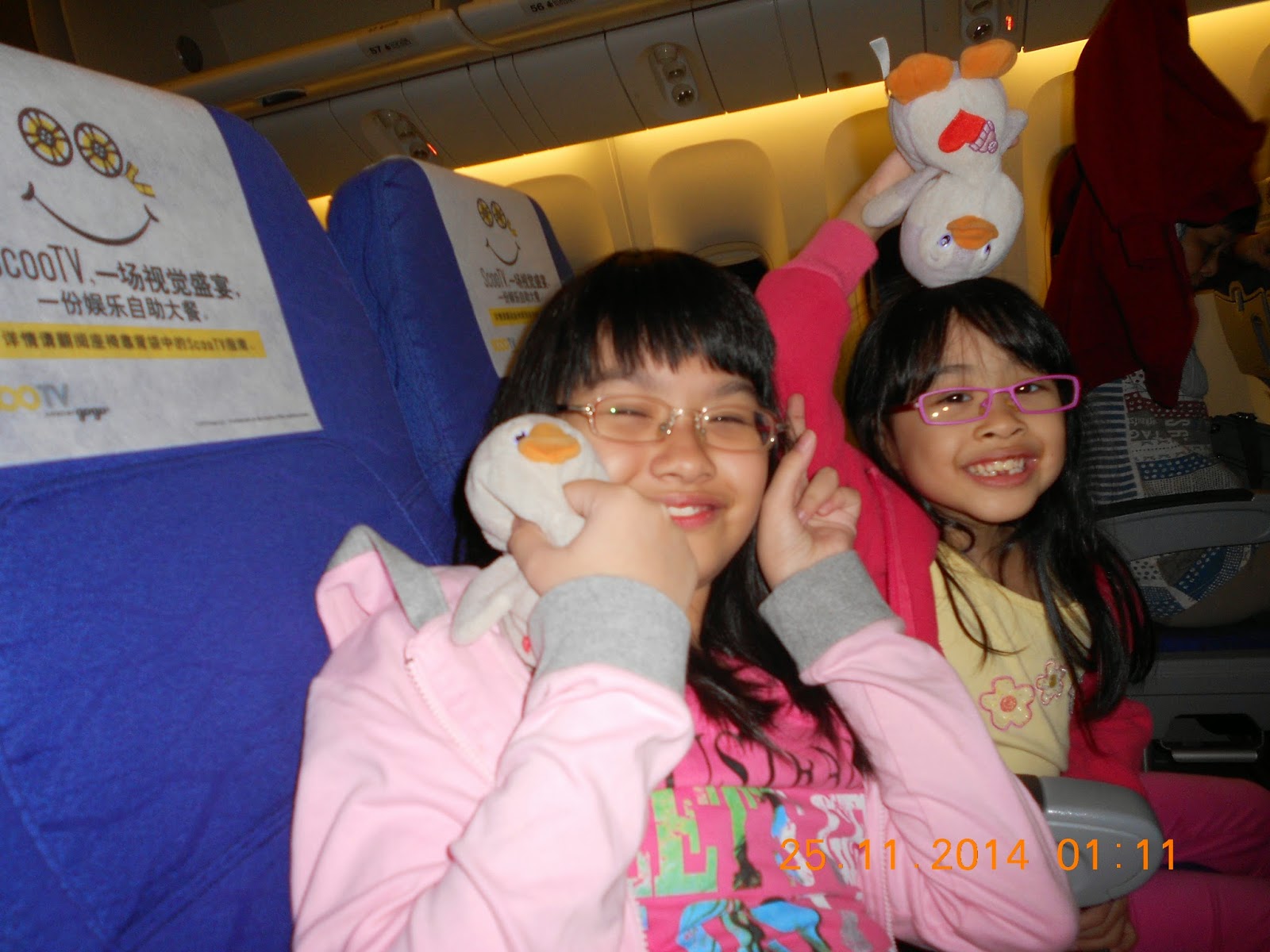 It was quite cold onboard the Scoot aeroplane, similar to other full service airlines.

After taking off at about 2.30 am, the airline staff (the scootes) went around the cabin with their Scoot cafe's snacks and beverages. Anyone could buy from them. We were already full at that time so there was no need to get any food.

We managed to sleep for about an hour or so. After that, it was quite difficult to fall asleep again for Ardon, Lynn and myself. There were a lot of "ding" sounds arising from passengers pressing the "call for help" buttons which were located at the side of the seat handles of every seat. While some were genuine calls for help, others were pressed accidentally. This included myself and Sera. I accidentally pressed it when I came back from the lavatory as I held onto my seat's handle for support to sit down. Sera accidentally pressed it while she was asleep.

Meals (included in our FlyBagEat package airfare) were served at 6.30 am (Singapore time). Lynn was too tired to eat so she only ate a bit. Sera also took a few bites only. Canned drinks (Coke or green tea) and Toblerone chocolate bars were served with our combo meals. As Lynn and I did not want to consume the canned beverages at that time, we paid another $8 in total for a cup of coffee and a cup of tea. I thought we could keep the canned beverages for later consumption. I only noticed that there was a water dispenser near to the lavatory much later. Then at about 7.30 am, we realised that we had to disembark at the Sydney airport to go through the security checks at the airport again before boarding the same flight TZ 3 Scoot aeroplane. We were too full to drink the Coke and green tea. We had to disembark at around 12.45 pm Sydney time (Sydney is 3 hours ahead of Singapore time). The flight arrived early at around 12.20 pm Sydney time. We had no choice but to leave the canned drinks on board :(.

After boarding the same TZ 3 flight at around 1.15 pm Sydney time, the plane took off at about 1.55 pm. From Sydney to Gold Coast, there was a baby onboard the flight who kept crying. It seemed that the baby was having some problems and needed medical assistance. The air crew had a busy time doing first aid work.  The plane arrived at the Gold Coast airport at about 3.20 pm. Before landing, there was the strange smell again.

We were told to remain in our seats as the medical team had to come up first to check and help the baby. So, we waited for another 15 minutes or so before we could disembark. We had to walk down a flight of stairs from the aeroplane and take a short walk before reaching the Gold Coast airport terminal building. Luckily we didn't have a lot of carry on baggage with us.

At the airport's public area, there was a cafe so we ate some food before going to our holiday accommodation - the Swell Resort.

Taxis were readily available at the airport. There was someone there to guide us to a Gold Coast cab. The cab driver helped us to load the luggage into the cab and helped us to unload when we arrived at Swell Resort. Such excellent service!